Home » Scouting » Order of the Arrow

Flight of the Arrow

The Flight of the Arrow is the official newsletter of the Wulapeju Lodge and is released quarterly.  To see the latest issue and read about lodge news, services opportunities upcoming events or to read a past issue click here. 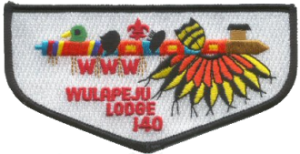 The OA lodge flap you wear on your uniform indicates you are a “current” dues paying member of The Order of the Arrow.  As an active member, you will have the opportunity to become a Brotherhood, or Vigil Honor member, attend events, help with official service projects, run for official positions and seek leadership opportunities within the Lodge.

Wulapeju Lodge is run by youth Arrowmen under the guidance of selected adult advisers. Each function of the Lodge is the responsibility of an elected or appointed youth. The Lodge Executive Committee (LEC) is made up of the Lodge officers (listed below) and the Chapter Chiefs. The LEC meets monthly except during the month of July.

Prior to 1971, Ma-Ka-Tai-Me-She-Kia-Kiak Lodge 140 served the old Blackhawk Area Council in what is now the Arrowhead, White Eagle, Sycamore, and Wanchanagi Districts. The name is the Indian name of Chief Blackhawk.

Wetassa Lodge 227 served the old U.S. Grant Council in what is now the southern portion of the Arrowhead District. Wetassa translates into “Little Bandit.”

In 1971 the Blackhawk Area Council merged with the U.S. Grant Council and the two lodges were forced to merge. The merge was not easy due to strong loyalties, long and proud histories, and strong leadership on both sides. Neither side wanted their history or legacy diminished by an unfair merger.

The Northwoods camp staff was in a unique position to be constructive peacemakers. They already felt like “outsiders” due to their far distance and that they were not “Camp Lowden.” Some on the Northwoods staff such as Walt Marti came from the Wetassa Lodge with prior Canyon Camp experience. Also, Dave Walter and Brian Rassmussen came from Ma-Ka-Tai-Me-She-Kia-Kiak. The three of them advanced the idea of the peace pipe totem and the name “Wulapeju” at the 1971 Fall Conclave at Canyon Camp where the merger was completed.

The merged lodge kept the lower lodge number (140) and thus became Wulapeju Lodge 140. The lodge chose to use the peace pipe on the lodge pocket flap and modified the Ma-Ka-Tai-Me-She-Kia-Kiak “arrowhead thong” totem.

The 50+ years intervening suggest that the merger has been a success. Canyon Camp and Camp Lowden continue their proud histories and members from all corners of the Lodge work together to make a strong and active Lodge.